Identifying and Addressing White Resistance on Boards of Directors 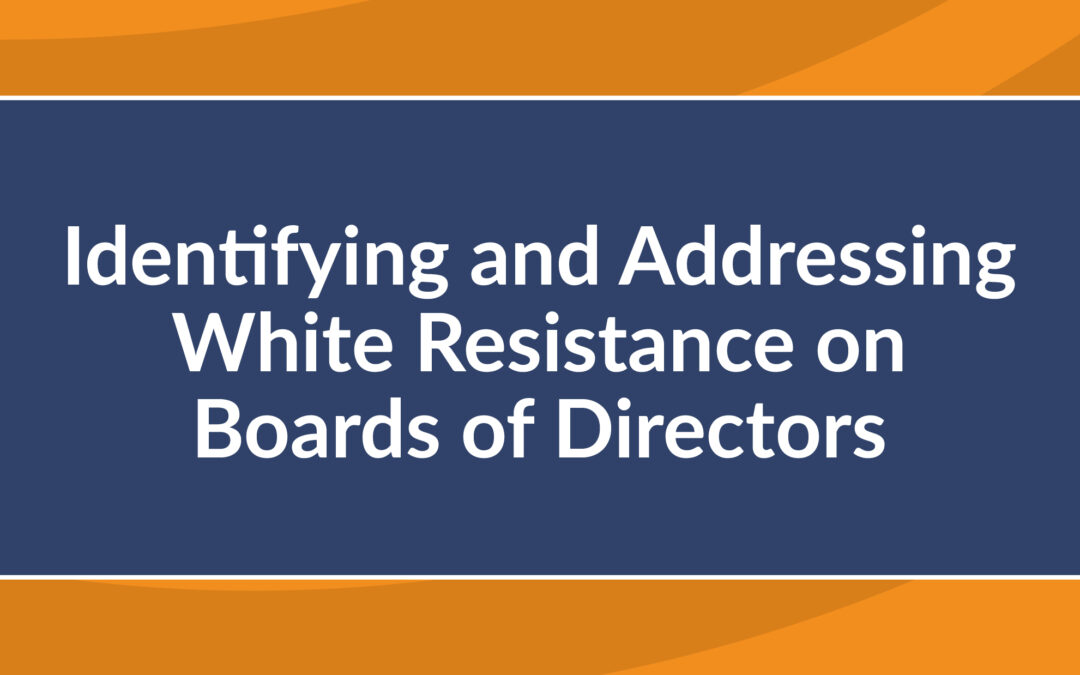 Resistance to racial equity takes many forms. The most blatant forms of resistance are easy to spot, for example, school boards and legislators banning the teaching of critical race theory in the classroom. Those who are adamantly opposed to critical race theory believe it is designed to make white people feel guilty about their success or admit that they do not deserve it. This has never been the point. It is designed to help us paint a more accurate picture of race relations in the United States and recognize that being a certain race bestows certain advantages or disadvantages.

Other forms of white resistance are more insidious. Individuals and small groups can create their own sets of words and behaviors that may meet external expectations for forward progress, but also allow for resisters to flourish within the system and prevent others from getting work done. For example, I recently learned of a nonprofit organization that is publicly committed to diversity, equity, and inclusion (DEI) work, but their board refuses to use the word “equity” to describe these activities. Why? To acknowledge that they are working toward equity suggests that equity previously did not exist. Rather than admit that inequities exist, this organization’s leaders changed the language they speak. They have created a new ecosystem that rewards resisters by exempting board members and stakeholders from asking hard questions and offering real solutions.

White people find acknowledging their own privilege deeply uncomfortable because it raises questions about who they are as individuals, whether they earned their success, and whether they earned it on the backs of others. The belief that hard work determines success is ingrained in all of us, as is the opposite—that those who are socioeconomically disadvantaged are so because of their lack of work ethic. If white people acknowledge systemic inequities, does it mean that there are others out there who worked just as hard but have nothing to show for it?

There is some irony in the fact that many nonprofit organizations exist to provide support for individuals and families for whom hard work will never be enough, and white resisters can still be found on the boards of some of these organizations. Whether the organization provides social support services or not, every board of directors is susceptible to white resistance and must proactively address it. Rather than building loopholes that make room for these attitudes, boards must be intentional in sharing evidence and fostering open discussion.

Where Do We Begin?

We need white allies to help us advance the discussion. In many corporate settings, the first person tapped to lead a new DEI initiative is Black. Being Black does not necessarily make someone an expert on DEI issues. They certainly have lived experience and can speak to many issues that their communities face on a day-to-day basis, but numerous other minority populations are a critical part of the conversation too. It takes a large diverse team with strong, capable leadership to fully understand the impacts of these issues and to develop actionable policies and programs that can help.

White allies and white champions must work with DEI teams to spread the message. In rooms full of resisters, many white allies hesitate to speak up. Some are not sure what to say; others maintain the status quo out of fear that they will be expelled from the privileged group. We have seen white people shy away from defending what is right out of fear of retaliation. White people often find safety in silence, conflating silent neutrality with active anti-racism. Their silence leaves a void that resisters will never hesitate to fill.

The need for allyship grows more and more important as white supremacy grows its foothold in the United States. During a House Armed Services Committee budget hearing, Army Gen. Mark A. Milley, chairman of the Joint Chiefs of Staff, provided a valuable example when he expressed his commitment to understanding white rage even though he is white:

“I’ve read Mao Tse Tung. I’ve read Karl Marx. I’ve read Lenin. That doesn’t make me a communist. So what is wrong with understanding, having some situational understanding about the country for which we are here to defend? … I personally find it offensive that we are accusing the United States military … of being ‘woke’ or something else because we are studying some theories that are out there.”

Predictably, his critics have no reasonable responses other than to attack his character; one Republican representative went so far as to imply that the military’s commitment to understanding issues of race is the reason we cannot win wars. This is not easy criticism for anyone to endure, but it shows just how important white allies are. When an outsider stands up for a disenfranchised group, they can speak to other white people with less fear of repercussion; their perspectives are not immediately invalidated simply because they are Black.

Building a Diverse Board

There are white allies everywhere, even if many of them are remaining silent. There are also vocal and silent white resisters. Few people are in the same place on this journey. There is a lot of value to spending time developing a common understanding among board members through open discussions, meetings, and training opportunities. First and foremost, a board needs its members to simply show up and have the hard conversations. Teams should engage in trainings, meetings, and discussions to examine the issues: racial inequities, sex discrimination, Asian hate, social injustice, what is happening in the news, and more.

These conversations must take place within the context of what the organization is seeking to accomplish. What is its mission? Who are its constituents? How do these conversations facilitate policies and programs that align the board’s philosophies and attitudes with the organization’s work on the ground? If individuals on the board continue to actively resist, it will eventually impede the work the board needs to do and the way the organization can fulfill its mission. Through regular conversations and exposure to data and information, most resistant board members will move to a better place of understanding over time. Some resisters will remain and may become more vocal over time as they lose power within the group, and eventually, someone will have to make a decision.

Achieving Alignment across the Board

Some individuals will continue to resist DEI initiatives, whether overtly through their statements or covertly by preventing forward movement on important initiatives. Many organizations hesitate to exit board members because they are large donors, bring a strong network to the table, have long-standing ties with the organization, or other reasons. These bonds are difficult to break, especially when donations are at risk. However, they will prevent the organization from doing the work that needs to be done. The breaking point will come eventually.

A resister may opt out from board membership on their own; if not, the board should prepare to dismiss them. Focused recruitment efforts can reduce the prevalence of these attitudes, and eventually rebuild a board whose values and philosophies clearly and overtly align with the organization’s mission and vision. Boards should be open and transparent with recruits in describing their purpose and why DEI is the lens through which they identify challenges and work to achieve the organization’s goals.

Time after time, we have seen how an open commitment to DEI drives alignment between the board, the organization, and its constituents. This alignment pays off—in my experience, organizations have little difficulty replacing and multiplying donations lost after resistant white board members depart. It is a long and challenging process. There is no right way to do it—most organizations are still trying to figure it out, learning and adapting along the way.