When Boards Fail: The Cost of White Resistance in Institutional Leadership 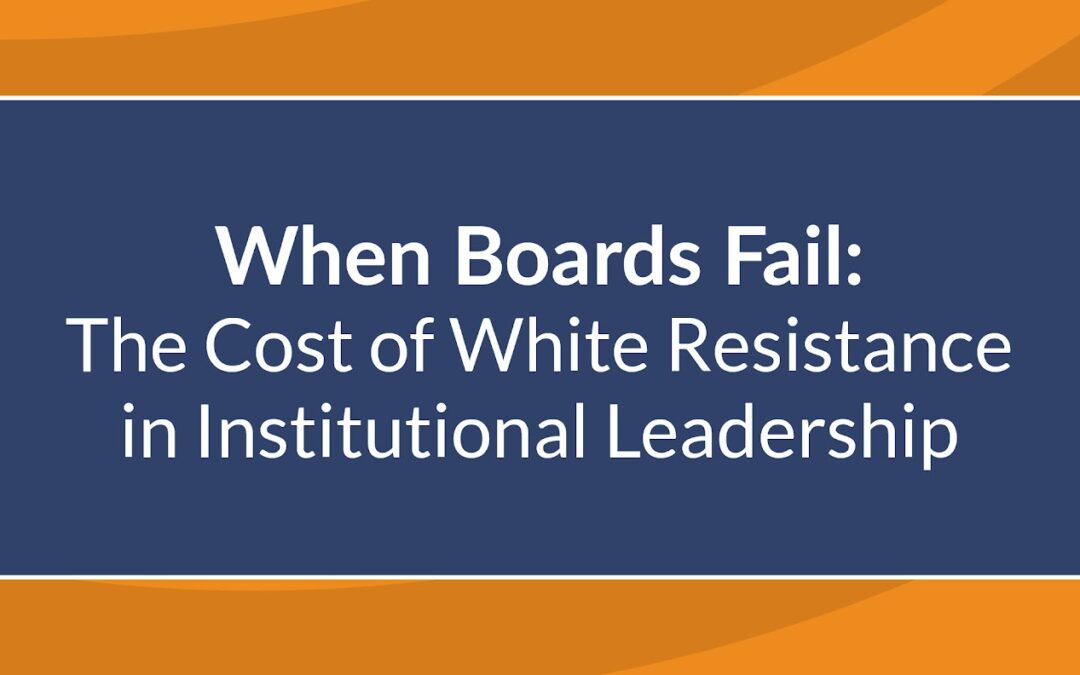 Nikole Hannah-Jones launched The 1619 Project in August 2019 to commemorate the 400th anniversary of the arrival of the first enslaved Africans in colonial Virginia. It is a long-form journalism project that places slavery and its myriad consequences at the center of our national narrative. Hannah-Jones is an investigative journalist known for her coverage of civil rights in the US. She became a staff writer for The New York Times in 2015, then was awarded a MacArthur Fellowship in 2017, and a Pulitzer Prize for Commentary in 2020 for her work on The 1619 Project.

These remarkable achievements led to UNC-Chapel Hill’s July 2021 decision to appoint Hannah-Jones as the Knight Chair in Race and Investigative Journalism, part of the Hussman School of Journalism and Media. Hannah-Jones is the first woman and first Black person to ever be offered this chair and offered it without tenure despite undergoing the rigorous tenure process at UNC. She earned positive feedback from faculty and the tenure committee. Despite widespread enthusiasm for her new role at the university, the UNC-Chapel Hill Board of Trustees did not approve tenure and instead granted her a five-year fixed-term professorship.

A wealthy white donor stepped forward. Walter Hussman, Jr. is the top donor and the journalism school’s namesake. Last year, he sent emails to top university officials expressing concerns about the hiring of Nikole Hannah-Jones and her work on The 1619 Project. He raised questions as to whether her work aligned with university values and whether her appointment would result in controversy. He fears that she will manipulate historical facts to push an agenda, one where our cultural narrative acknowledges the ongoing impact of Black slavery. He employs “whataboutism,” taking offense that Hannah-Jones did not pay sufficient homage to white men’s contributions to racial equity in the US.

Hussman, who recently pledged $25 million to the school, stated that he thought his comments to the university leaders were private and, had he known, he would not have made them publicly. Hussman’s meddling raised serious concerns about donors having excess influence over key university decisions, especially when only part of the $25 million pledge has been delivered. Hannah-Jones’s supporters overwhelmingly agree that the Board failed in refusing to acknowledge her bid for tenure. The fact that other Trustees would only speak out under condition of anonymity raises an even more disturbing question—why are Board members not advocating for racial justice?

UNC Hussman outlines its commitment to diversity as a key part of its mission on its website:

Because meaningful and productive public conversation depends on the inclusion of diverse perspectives, the school is committed to providing an environment for teaching, learning, and research that includes individuals from diverse backgrounds and with differing interests, lived experiences and goals; that reflects the diversity of the state of North Carolina and the world beyond; and that supports intellectual inquiry, dialogue and opportunities for lifelong learning and growth necessary to successfully engage in public conversation in a global marketplace of ideas.

With this context, Hannah-Jones’s tenure rejection becomes even more baffling. If the institutional mission is to include diverse voices and Hannah-Jones successfully underwent the entire tenure process, why was she not granted tenure? Why did the Board back down in the face of white resistance?

Fear (or Façade) of Donor Loss

The fear of donor loss is very real and nearly universal among nonprofit leadership. Board members have a fiduciary duty to ensure sustainability of their mission. They are expected to make decisions that improve financial positions and support strategic outcomes. Often boards become entangled in false dichotomies about being able to ensure their fiduciary responsibilities as inconsistent with their mission-focused responsibilities to advance inclusion, equity, and social justice.

The bottom line is that decisions should be made in the best interests of the organization’s mission, not the interests of individual members or other external entities. Because nonprofits from all sectors depend on donations, the potential loss of a high net worth donor is a significant risk in the short term. Unfortunately, engaging in or permitting discrimination, or any form of bias or inequality, simply to keep donors is short-sighted and highly unethical. This zero-sum gain perspective isn’t new, and ignores the real risks of losing talent, partnerships, funders, clients, and most importantly your organization’s reputational capital. It also hinders advancement by aligning long-term strategic decisions with temporary personal or political agendas. These kinds of choices impact the credibility of your organization and hinder development officers’ ability to have honest and meaningful conversations with future donors. How can they bring new donors if the current board’s activities do not align with the institution’s mission? Those who are committed to social justice will worry about how their funds are used, and rightly so.

It is also a missed opportunity of magnificent proportions. When board members make decisions based on fear of financial insecurity, they fail to embrace a moment of true leadership, an opportunity to demonstrate bravery and courage.

At best, they are settling for the status quo—maintaining an existing donor base—at the expense of reaching out and securing relationships with emerging donors who are eager to support social justice in all its forms.

At worst, the fixation on potential negative financial impacts of inclusion, equity, and social justice decisions is simply a façade. It is a story that obscures the real agenda—to maintain a status quo that allows for active white resistance and provides fertile ground for systemic racism to continue to flourish.

Reshaping a Problematic Board

A board comprised of all white men simply cannot see every perspective on these issues. To achieve real progress, the board must change their entire ideology as individuals and as a group. It is every leader’s responsibility to advance diversity, equity, and inclusion in their organization. It is not optional, but many trustees have not accepted this responsibility. This type of leadership starts at the board level, and it requires courage. Leaders must honestly acknowledge their own internal biases and privileges. They must overcome fear, guilt, and anxiety associated with membership in a privileged group. They must look closely at who benefits from their decisions as an individual and as a collective.

Perhaps most challenging, the board must admit that it is impossible for a privileged person to walk a mile in the shoes of the oppressed; without Black voices, there cannot be meaningful progress toward racial equity. As the privileged group, it is critical that the board invite diverse opinions from their constituents—students, faculty, advocates, and allies, and even the local community surrounding the campus. White people on boards must accept that, without these voices, they do not have all the information necessary to make an informed decision on a DE&I initiative.

It can begin with collective training and discussions about these topics. It is critical to achieve a common understanding of DE&I as a group and be able to articulate the meaning and purpose of the work and develop strategies. Boards that have a demonstrable positive impact on DE&I initiatives possess several characteristics:

They are committed to personal growth.

They actively work to increase awareness and understanding of all the ways in which BIPOC (Black, Indigenous, People of Color) are underutilized, undervalued, and marginalized. They recognize and celebrate the vibrancy that BIPOC brings to communities. They work to build relationships and trust by creating alliances, challenging prejudiced narratives, and confronting generalizations. They also openly face discomfort, admit their privilege, and accept vulnerability as part of the learning process.

Aware leaders are capable of sharing facts and data about inequities to help build a narrative. They believe in the realities of how race and white privilege have shaped everyone’s lives, and they can describe the social determinants that create persistent inequities. They acknowledge the impact aggressions and microaggressions can have on marginalized communities and people, and they are knowledgeable about the impact of systemic racism in the community.

Responsible leaders begin by understanding and believing historical data and current facts around racial disparities, inequities, and systemic racism. They use this understanding to help promote a shared understanding of DE&I and lead the institution’s commitment to forward momentum on these issues. Racial equity is a lens through which they complete their daily work, and they possess the courage to elevate their voices and actively engage the community.

They drive impact through action.

Impactful boards participate in training and discuss issues like diversity, racism, and anti-racism openly. They collaborate to achieve a common understanding of the meaning and purpose of DE&I and actively share their intentions with other leaders and stakeholders. They pay attention at the operational level (e.g. leveraging technologies like anti-bias systems to support DE&I in everyday business processes). They also pay attention to language and culture (e.g. reevaluating words, images, and actions to communicate the commitment to DE&I).

For a board of directors to become a board of allies, they must commit to recognizing privilege and working in solidarity with marginalized groups in the struggle for equity and social justice. It is in everyone’s best interest to end all forms of inequities, even those from which they benefit in concrete ways. They must also move beyond changing hearts and minds and remember to change processes and policies. Most importantly, they hold themselves and others accountable by rewarding bravery and courage rather than fear.

Update: In June, Hannah-Jones communicated to UNC Hussman via lawyer that she would not accept the Knight Chair position without tenure. Tenure was eventually granted in a last-minute closed-door vote, but Hannah-Jones opted to accept a role at Howard University instead. Read her full statement here.